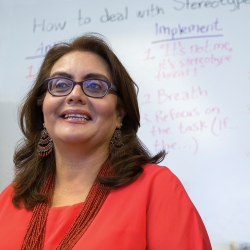 Some people are on fire, driven and motivated to create lasting positive change, to light a spark in the hearts and minds of others. Leti is the lead PI and the fire behind SF BUILD. Her passion for social justice and systemic social change is contagious. Her energy flies through a room as she pulls you under her wing. Similarly, over a hot fire, Leti's mother filled the hearts and stomachs of others with her fresh tortillas and incendiary words.

Leti’s mother, Lupe, learned to make tortillas from the maize her family dried on the dirt porch of their rancho near Jalpa, Zacatecas. Growing up, Lupe cooked the tortillas over an open flame for her 10 brothers and sisters. Later, in Sacramento, California, she cooked them on a gas stove to supplement delicious meals for Leti, her brothers, and sister. Leti recalls rich conversations that would be "disrupted by the flying homemade tortillas that my mother expertly threw to land in the canasta located in the center of the table." Leti's mother modeled the compassion of an open heart to share her wisdom, and an expectant hope that it would be used to better both her children’s lives and the communities they joined. In fact, both of her parents had high expectations of their children and settled for nothing less than A's in their schooling. This is one of the ways they showed their love for their children — and while they wanted Leti to stay close to home, she was on fire and determined to go to Stanford.

Leti is the first person on both sides of her family to be born in the United States. She grew up speaking Spanish, learning English as a second language. Leti always wanted to be a scientist. She remembers Bugs Bunny cartoons with Bugs dressed up in a white lab coat, mixing chemicals and making change happen. The cartoon rabbit made being a scientist look cool and fun, magical, and since then Leti has been hooked on science. "As a scientist Bugs Bunny had the ability to change things as evidenced by a new hairdo he created with green fluid. I wanted to be a scientist because science looked fun, and in retrospect because I have always wanted to change things, to make a difference."

So Leti majored in biological sciences at Stanford, but it wasn't always fun. She often struggled with her introductory classes and considered changing to Chicano studies at one point. She struggled to get research experience and professors were not always supportive. "The first time I went to office hours was for a biology class, and the professor made me feel like I was wasting his time — I didn't go back to office hours for three years after that."

Although she didn't know about stereotype threat when she was in school, she recognizes the way it affected her academic progress. For example, she was constantly being challenged about her academic abilities because of negative stereotypes attributed to Latinos. In high school people's threats were obvious, but in college, the threats were veiled. While not being aware of it at the time, Leti turned the threats into personal challenges. “If someone told me I couldn't do something because of being Latina I would think: just watch me!"

Her current research in the Health Equity Research (HER) lab is on how social disadvantage, including racism and other forms of discrimination, get "under the skin" to cause health disparities. Her group aims to make meaningful contributions to the knowledge that will improve the health and well-being of underserved communities. Leti's most influential mentors are her parents and grandfather, giving her a strong foundation of hard work, resourcefulness and resilience, traits she intends to pass on to the students and faculty in SF BUILD.

Continuing in the same vein as her mother, Leti makes amazing meals and you'll often find her enjoying good food at home that, of course, often include tortillas, or in a nice restaurant having long, thoughtful conversations with family and friends.